The Master and High Chaplain together lead a team of officers which can be divided in four Chapters, each chapter permitting up to one Chaplain and one Lieutenant.

The knowledge chapter focuses on researching the theory and nature of the Light. It also provides training in medicine. In times of war, the Knowledge Chapter tends to lead the infirmary or medical bay of the campaign.

The arms chapter forms the core of the Order's military operations. It focuses on the tactics of warfare, skill at arms and patrols. The Arms Chapter leads the Disciples in battle and generally handles all military concerns during the campaign.

The Academy is concerned with the recruitment and training of the junior ranks of the Disciples of Light. It focuses on arms training and the elementary teachings of the Light, and the guild.

While currently inactive, in times of political distress the Disciples of Light call upon the political chapter to support the political bodies of the Alliance. This Chapter also works as diplomatic body, should the need for particular diplomacy arise.

The senior ranks of the Disciples of Light

Champions of the Disciples of Light

The title of Champion is a title of merit, awarded to Disciples who have demonstrated exceptional devotion or sacrifice to the Order and the Light. It is awarded only with the approval of the Master or High Chaplain.

Throughout the guild's history, the title was often awarded posthumously to those Disciples who have sacrificed themselves for the better of the Order, Light's quest or the Alliance. It is known to be given to some Chaplains after a long and productive term.

Champions carry the same duties as Knights, both towards the Order and the people of the Alliance. However, their accomplishments often gain them a status of reverence among their fellow Disciples, making them favorable leaders when no officer is available.

Known Champions of the Disciples are:

Knights of the Disciples of Light

Knighthood is an accomplishment on itself and the final mark in a carreer of hard training and development, but it also symbolizes a new beginning. Once a Knight, the Disciple becomes a shining symbol of the Light and righteousness. A Knight is always on a quest or ready to defend the innocent! A Knight is required to function as a full Disciple, but is also deemed capable of leading his own operations for his Chapter and make independent choices in his actions.

Squires of the Disciples of Light

Upon completing the requirements for promotion, Disciples can be promoted to Squires. Squire is the first senior rank of the order, in which the Disciple is required to make a choice in Chapter. Depending on which Chapter the Squire will join, they will be trained, measured and tested differently.

Generally, Squires receive the final stage of their training in the ways of the Light. They are also given their greatest challenges to prove themselves worthy of Knighthood. Aside from their new tasks and chapter specific training, they are expected to ride (or learn to ride) the swiftest of our gryphons, and assist allies in the toughest and ongoing battles.

Academy ranks of the Disciples of Light 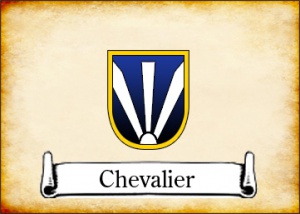 Symbol of the Initiate

If the Initiate passes all requirements for promotion, they become Initiate. Their teachings in the Light are continued and more challenging tasks are presented. Initiates partake in the day to day work of the Disciples, working their way throughout the lands and aid our allied forces where required.

As they serve the Order in active duty, they also learn to prepare to choose a Chapter and how to serve it. 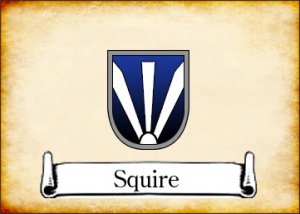 Symbol of the Novice

Novices are the starting rank for all Disciples. It is a first step in being taught the ways of the Light and the Order. Most Novices manage to grow rapidly under the teachings of the Academy Chaplain, to the rank of Initiate.