(Redirected from Chapter Of Knowledge) 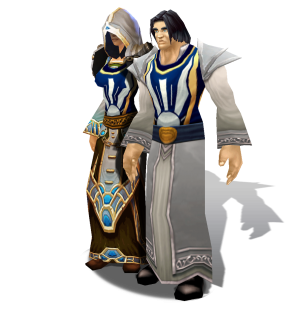 The Chapter of Knowledge specializes in studying the Light, law and the enemy. On one hand it offers supportive roles in teaching, commissions and politics. On the other hand, it handles specialized trainings and organises the medical wing of the army.

Under the leadership of Chaplain Jean-Pierre d'Armagnac, the Chapter of Knowledge was reformed into five parts:

Each deparment has its own body of operations, although people can partake in more than one body of operation. While some department have their own structure, these is no direct parallel with the promotion requirements. Never the less, accomplishments for promotion may be valued by certain departments, and vice versa.

Paramount to the Chapter of Knowledge is a profound study of the Light, its words, its ways and spreading its message. The Light preachers specialize on the philosophy of the Holy Light. They then put this knowledge into practice,

A Disciple in service of the Chapter of Knowledge can acquire the title Preacher. This title is awarded by merrit, and no formal rules exist to award it. In general, an applicant for the title is expected to have:

Once a Disciple is titled Preacher, it is expected he continues these tasks and helps teach or evaluate fellow preachers.

Department of research and development

The Chapter of Knowledge continues its duties to gather knowledge that lies beyond the mundane. This department will accept new applicants and new research topics openly. Applications obtain the title researcher by default. When proven master of a particular topic, they may be named professor.

While the department isn't restricted to these topics, it currently categorizes its research in the following topics:

Professors in these fields can teach other Disciples. The teaching is not restricted to Disciples of one's own chapter. Indeed, in times of particular needs, these teachers help in the training of all Disciples.

Department of medicine and healing

The Chapter of Knowledge specializes in healing and nursing the sick or injured back to health. This focus lies both on the battlefield and outside of the warfare. The medical wing is responsible for the logistical management of the field hospitals in times of war. Doctors, surgeons and healers will also dedicate to teaching others the basics of first aid. One can obtain the title of doctor, or surgeon by displaying mastery in the field. With these titles come responsibilities in times of need.

The major topics of education and mastery are:

Generally, this department is a supporting body. It is superceded by the Chaplain of Knowledge, High Chaplain and Master Chaplain, but serves to support these bodies in dire times. This advice may include recommendations on deontological codes.

Aside from ethical commissions, this deparment specializes in the legal procedures of our King. This knowledge is applied both internally as well as externally, to the legal system of our Kingdom.

Disciples working their way in this department may be titled Esquire. Should they achieve the title of Magistrate of the King, then they retain this title within the department.

Department of diplomacy and politics

The department of diplomacy and politics has been reinstated by the Chaplain Jean-Pierre to replace the long absent Chaplain of Politics. What duties were fulfilled by one man, now is carried by a team. The department focuses on maintaining diplomatic ties within the Kingdom and outside. It tries to maintain or strengthen its political ties. The political weight and strength of this department is used to strengthen the image of the Church in structured of authority. And finally.. the department of diplomacy and politics focuses on intelligence gathering.

Disciples in service of this department can gain the duty or title of diplomat for a particular order, nation or continent depending on their abilities. Should a disciple acquire a political title, then this title is retained and used within the department.