The Consumption Induced Nothingness Pump (CINP), a.k.a. MedDrain, is a glass contraption, with several tubes of the same glass.

It looks to have been blown to fashion a big bottle, with a cork on top. It links to a pig intestine sleeve that ends in a large needle. 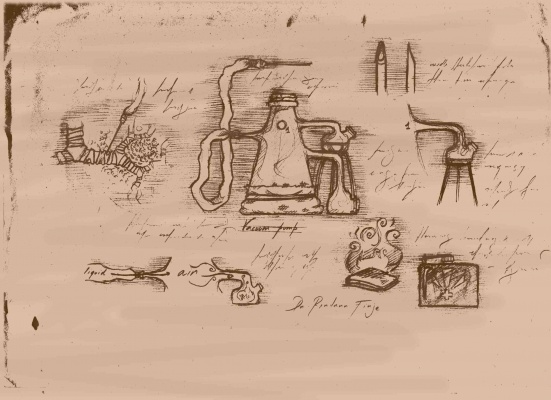 The CINP was invented by Doctor Rentarn Finje, presumed to be an answer to lung obstructions. While traditional fadeleaf vapours do have their magical effect on clearing the lungs, more thorough lung obstructions resulting from fluids or coagulated blood (in chest wounds) proved difficult to treat. This pumping mechanism was designed to pump away such obstructions.

The pump's mechanic is quite simple, in all honesty. The alcohol flames placed in the peripheral bottles consume the air that is contained in the sealed glass complex. This gives place to a phenomena called horror vacui and an attempt to compensate will follow, by drawing whatever is in the only open end of the system: the needle. If the needle is positioned towards air, it is air that the pump will receive, but - in a more medical objective - if it finds itself against fluid, it is fluid it will draw upon.

The pump is aimed to treat severe pulmonary oedema, and can even be targeted for applications on other body parts.

I've reached the conclusion that - in an attempt to avoid smoke accumulation from the flame - it is best to only set fire to alcohol, and not the bandage doused in the aforementioned liquid.