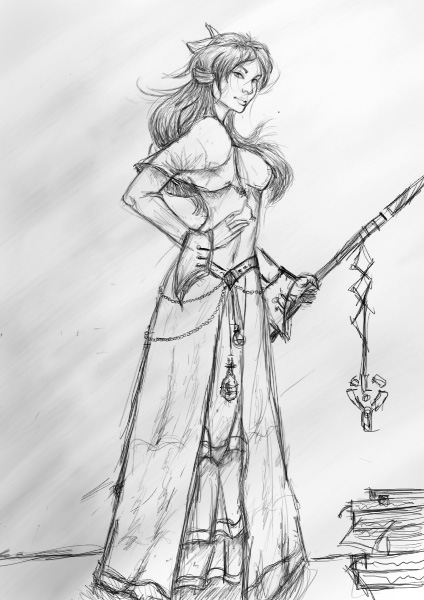 Priestess Shariah Abigail Longhill, Priestess of the Light, Discipline Healer and Political Chaplain of the Disicples of Light. A lady more simply known as Shariah, the mysterious Priestess. She is a woman almost in her middle age with a very stern and serene appearance, taller then most and she is well spotted in a group of people, eyes wide open with wonder and a hint of sadness.

Shariah was born on a warm summer day in a small pirate village in Stranglethorn Vale, her mothers first and only daughter, she was at first named Shira but as her mother travelled north to hand Shariah over to her father who was a guardsman in Darrowshire, (Eastern Plaguelands,) her name was changed to Sara, a more common name for a more common place.

As Darrowshire at that time was not a safe place to live, her father got her adopted by another family living nearby Southshore, the Longhills. There in the peacefull Hillsbrad Foothills, the little girl with dark olive skin, dark red curly hair and sparkling blue eyes got known as, Shariah Abigail Longhill, the oldest child of Abigail Longhill and Johan Longhill, together they aswell with the coming years got a son, Graham.

With the years Shariah got more and more into the countryside life and aswell got her first experiance with the Holy Light. A group of Priestesses and Clerics once traveled through Hillsbrad and made a stop on the way, there they held a mass for the villagers who was hard working, they were from the brilliant kingdom of Lordaeron. She directly caught an intrest of their teachings and the power they called the Holy Light, it was warm, kind and caring. Shariah was mesmerized by it's power to help others, very soon she decided her path in life. Priesthood.

Shariah and the 2nd War

The news of the war was everywhere, nor the least in Soutshore, the great kingdom of Lordaeron was beneath a heavy threath from the Horde, even though everyone believed that they could not lose the war with their mighty Paladins, the greatest warriors. Shariah had seen them many times yes, how they patroled the areas on their white stallions, carrying heavy weapons and shields.

One of these common mornings, the town was silent, the villagers was just about to wake up as the sky suddenly turned red above their heads. The fire was there, the drums of war was drumming loud in the distance, the hammering of plated feets marched down the small stone roads. The horde was here. Luckily, young Sara had woken up early due in the need of the lou and were not present. Though in her head these new noices was not right, as she returned to her home that was now on flames she saw all of her family and the rest of the village gathered in a big circle in the middle of a big mass of Orcs, one by one their heads got cut off.

Shariah ran, ran as fast as she could in terror. Halfway down the rode someone picked her up, it was one of the Paladins on his horse, his eyes was painted with panic, fear and anger. He took her to the harbour of Southshore where one of the rescue ships had arrived, and soon Shariah left her calm life behind to ride the tide towards Theramore Isle.

Theramore Isle was big, well guarded and frightning. Atleast for a young girl who had just lost everything she knew. Once at shore she got escorted along with the rest of the survivours to a small area where there was tents, fires and fresh food.

The days went past, so did the years. Shariah was helping out with the little chores she could do and soon she was placed within a house where she was to serve as an apprentice to a Ladies Maid, to learn her duties and routines. Within these routines was one of them to follow on the Holy Masses, held by the priesthood and paladins. This as before caught alot of Shariahs attention, and very soon she found herself sitting on her knees along side the other priestesses, learning in secret about the Holy Light and the life of a Priestess.

One day as she was leaving the small Chapel in the shade of the Night on her way back to her doorm she bumped into a man, not much older then her, perhaps ten years older. ( Shariah was here about 15 ). He had crow black hair and his eyes was cold as they stared at her, almost a bit in shock. As if he had seen a monster he spoke, ” Young ladies should not be running out in the middle of the night, dimwit”. Sharaih barly heard him, she was stunnded by this man, as if something had struck down her to the ground she stood still not moving. That was the day that she met Tydor for the first time in her life.

Another few years passed on, and now Shariah was a proud young lady, filled with confidance and hunger for life. Mostly eager to leave her duties as a ladies maid and search for the great Capital city of Stormwind!. The man with the crow black hair had left Theramore a long time ago, so she had stoped having hopes about him, yet she could not help to ponder sometimes. At this time Shariah was a very curious being and she found herself confused when the Lady of the house dismissed her from her duties, gave her a small sack of silver and told her to leave to never come back.

Oh my, Stormwind... and a suprise.

Within a few weeks Shariah stood by the gates of Stormwind, the biggest city she had ever seen in her life. Finally she could do as she wished. The dream she had kept within her heart for heart for so very long seemed not too far away now, for this was also known as the City of the Light. Curiously she took her steps towards the Cathedral of Light that pointed up in the sky mighty and powerful. Very soon she found herself standing with a candle holder in her hand in the basement of the Cathedal, trying to explain to the man with crow black hair and cold eyes what she was doing sneaking around there,

After alot of explaining and many weeks in eachothers company Shariah grew more and more found of this calm paladin known as Tydor White. He did have a very kind heart with alot to give, aswell he was a very mighty man. Important and always needed to curse the evil known as the Cultists, follow in great war campaigns against the horde and discuss politics with the other higher ranked people, the kind of people Shariah did not understand. Yet in this mess he found time for the little young now to be priestess that had the luck to become an apprentice of Bishop Fortesgue.

The month passed swiftly, soon she had met alot of people with the same thoughts as her upon the Light and with the guidance of Fortesgue she could control the warmth she had longed for, the Light. Aswell a man known as Rentarn Finje had taken her beneath his wings of knowledge and taught her everything he knew about First Aid, that was when Shariah caught her eyes for Healing. He introduced her to the Disciples of Light, an order that could help her, and Tydor spoke well about them aswell. Very soon she was carrying proudly the tabard of white, gold and blue. Aswell as a silver band upon her left hand crafted by the elves he said, to forever seal their love for one another.