Sister Adabella Nightshade, Champion of the Disciples of Light. 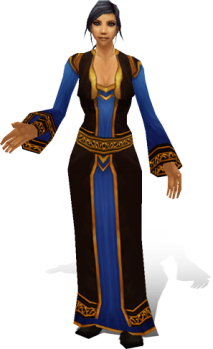 Adabella Nightshade was a priestess in her youngest twenties. She had dark hair and deep eyes. One could say she had strong feminine figures and was pleasing to the eye. But such thoughts would quickly make way for her remarkable and assertive character. She stood proud, though pride never stood in her way of asking questions and counsel. She stood upright and taller than her length would indicate.

Despite her assertive and free spoken mind, Adabella wielded compassion and tenderness with equal ease. In the infirmary, she would often wield order with a stern hand, but show naught but warmth and kindness to her patients.

Adabella followed, above all else, her own heart. It was her own heart that led her to the Light and ultimately her own sacrifice. 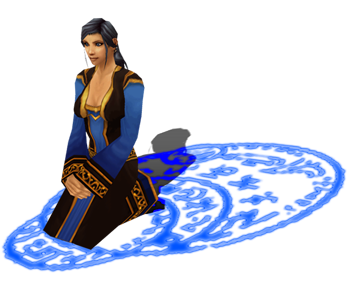 Unfortunately, much knowledge is lost on Adabella's background before she was lost to the Disciples. It is known she was either raised among, or following closely, the clerical orders of Northshire.

The Light was her manner of letting her heart express its compassion and desire to help. One could note the Light flower from her heart, rather than the Light guided her heart.

Time with the Disciples

Adabella signed up to join the Disciples of Light during a time of crisis. Stormwind was in the iron grip of a terrorist movement called the Hand of Nightmares. Using a pestilence as biological weapon, the city was in state of upheaval and quarantines.

During this time, Adabella assisted Jean-Pierre d'Armagnac in his endeavors to stop the plague. Pierre still contributes their joint success to her ceaseless efforts and wisdom of character.

Adabella lived to see the end of the pestilence, her death marking the end of it. In an act of sacrifice, she freed the last patient from the disease, Jean-Pierre.

Following her sacrifice, Pierre returned to the Cathedral with her body for a proper burial. Pierre led the Funeral Of Adabella Nightshade himself. After the service, Sir Aarian Northlight decorated her for her alruistic spirit and declared her Champion of the Disciples of Light. This would also offer her a final resting place in the Catacombs, among the greatest men and symbols of the Church.