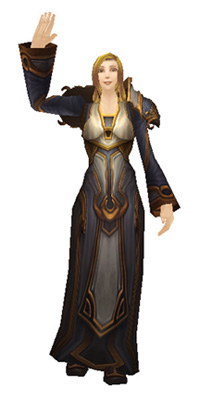 Priestess Irys Grimrock, Deacon and High Cleric in the Chapter of Knowledge with the Disciples of Light.

Irys Grimrock was born roughly 25 years ago in the city of Gilneas behind the Greymane Wall. She has green eyes, dark hair and is generally very beautiful and innocent looking.

She is the daughter of Jack Grimrock, a hunter, and Milly Travis, a clerk at the Gilnean First Bank.

Irys has one sibling, an older brother named George.

Irys enjoys observing the daily life in the city of Stormwind and everywhere she goes. She has a keen eye for detail and attempts to envision the essence of the Holy Light in everything she sees.

Irys is always ready to help those who are in need of assistance or have lost their way either literally or spiritually. She is a cheerful and sometimes overly curious Gilnean girl.

Irys grew up in a small farmhouse on the edge of Gilneas city. Her mother was at work in the city every day, while her father was usually home during the day and out hunting at night. While her mother provided a steady income, her father was able to earn some extra gold by selling animal hides and saving money on food by eating what he killed. This extra bit of gold was kept aside for when George and Irys were old enough to get a decent education.

Irys had a big group of friends, all children from neighbouring farms, with whom she spent time almost every day. Her relationship with her brother was very close, though they usually did not play games together.

While she was still too young to attend school, Irys was home-taught by her mother during her spare time. As Irys grew older, she attended the basic and higher educational schools in the city. She finished her education at the age of 17 and moved on to the Gilnean Cathedral where she began her studies to become a priestess.

The Gilneans always believed they were safe behind the Wall; safe from outside interference with their lives and safe from any danger. Until the day came when the Wall was destroyed and feral Worgen poured into the greater area of Gilneas.

Chaos and panic erupted everywhere. Irys was just returning from the city with her brother when they heard the screams behind them. They turned around only to see fast moving shadows and glimpses of people being torn to shreds. They quickly ran home and barricaded themselves in the basement with their father and mother by their side.

Frightened civilians broke into their home to find refuge. Several moments later, seemingly endless screams were heard as the wild Worgen beasts burst into the farmhouse and killed everyone upstairs.

When they heard the beasts leave and everything turned silent again, Irys’ father took his rifle and carefully checked the upstairs part of the house. He was gone for a long time, and eventually Irys’ mother went to look for him. They both returned safely several hours later. They informed their children that the citizens are gathering at the prison’s courtyard to mount an offensive. The family set out to listen to the announcements at the prison as the feral beasts came once again out of nowhere and overran the prison area.

In an attempt to find shelter, Irys and her family ran into a nearby house and barricaded the front door with furniture.

Multiple days passed. Screams were heard almost all the time, accompanied with gunfire and military commanders shouting instructions to their troops.

Eventually the family was found by an armed group of farmers who informed them about Night Elf evacuation ships which arrived at the harbor moments ago. As word got out about the ships, the remaining citizens went into a frenzy and rushed towards the harbor area. During the rush, Irys and her brother lost their parents. To make matters worse, George had been caged and taken away by an angry mob after he was bitten by a feral.

Irys was forced to travel to Darnassus on her own.

While Irys was amazed by the city’s architecture and culture, she could not call Darnassus her new home. She regretted not staying behind to discover the fate of her brother, and of her parents. She always had a close bond with all of them, though now she felt as if the bond between her and her parents had been cut. Irys knew her parents were dead. She was hurting, sad, lost, lonely.

Irys decided she could not stay in the Night Elf capital. She took a boat to Stormwind, yet another place she had only read about during her studies.

Upon arrival in the city, a fisherman directed her to the abbey in Northshire. Irys had not given up on her hopes to becoming a priestess. She felt she needed to do something more, she needed to make a real difference.

As Irys’ training progressed in the Abbey, the brothers sent her to the city on a daily basis to observe the daily life there and learn from what she witnessed, one of her favorite tasks.

On one of her visits, she bumped into a priest named Jean-Pierre d’Armagnac. This wise young man spoke to her about the order he was in; the Disciples of Light. After giving it some careful consideration Irys returned to the man several days later and requested to join the order, believing it would greatly benefit her studies and that she could offer assistance to the Disciples any way possible.

With the help of Chaplains Jean-Pierre d’Armagnac and Venji the Grand, Irys advanced fast with her studies and attained the rank of Squire, followed by the rank of Gallant. As a Gallant, she is currently working in the Chapter of Knowledge under the guidance of and assisting Chaplain d’Armagnac as best she can.

In her time with the Disciples, the Chaplain has given her training on several topics including patient treatment and perseverance in times of distress.

After the attacks of the Forsaken on Eastvale, many people were left battling a new plague. Chaplain Jean-Pierre d’Armagnac offered his dedication to find a cure for this plague, which eventually led to a search for a Black Lotus in the Blasted Lands.

After having spent a short amount of time in the village of Surwich in the Blasted Lands, Irys was reminded by the architecture and the inhabitants about her home and what had happened to her family and friends. She realized she never took the time to grief for their loss, and so she decided to travel to the greater Gilnean area in search of closure.

Over time, Irys and Chaplain d’Armagnac – Jean, as she would call him – got closer to each other as they worked together day in, day out. The intense training they shared would create a strong bond between them, one fused by the Light… and eventually by love as well. The day Jean revealed his feelings for her was one of the happiest moments she had experienced in a long time, and also one of the scariest. Together, they approached High Chaplain Valestrion Drayke and informed him of their love for one another. They received his blessing if it would not interfere with their duties. Irys and Jean proclaimed it would not, and have been together ever since.

After years of training and trials, Irys was granted the rank of Knight during a grand ceremony in the Stormwind Cathedral. The ceremony was led by High Chaplain Valestrion Drayke with the aid of Chaplain Jean-Pierre d’Armagnac as Irys’ sponsor. Gallant Rae Wulfgnar was Irys’ supporter during the ceremony. Gallant Irys Grimrock became Lady Irys Grimrock. Although she did not become a plate armoured Knight, the High Chaplain informed her that the title is recognition of the path she has travelled as a Disciple. By this title, she could show the citizens that they can approach her at any time with their problems.

As she worked ever more diligently within the Order, she gained the trust of the senior members and was eventually promoted by High Chaplain Valestrion Drayke to Lieutenant of the Knowledge Chapter. As Lieutenant, she became the right-hand of Chaplain d’Armagnac who was doing more work than he could handle in the King’s Royal Library.

One day, the Disciples were called out to deal with a Lich who had taken over the catacombs under Raven Hill in Duskwood. Irys was tasked to accompany Sir Beladon Indarys, Sir Tam Urthwyte and Squire Susan Earlstead into the catacombs as the other Disciples fought back a seemingly endless onslaught of reanimated skeletons and undead corpses. Upon defeating the Lich, a violent explosion of shadow, fire and ice caught her off guard and struck her down. Her robes caught on fire; her allies scurried to put out the flames. Irys was badly injured, having suffered burn wounds all over her body as well as a broken left arm. The wounds were quickly treated by Initiate Lini Richfield, and Irys slowly recovered from the ordeal. She was experiencing temporary memory losses, bursts of anger and disrespect, and was spotted drinking alcoholic beverages…. Nobody had sensed the manifestation of a shadow taint inside of her, until it was too late. The taint slowly consumed Irys, until it was finally strong enough to be sensed. Squires Monrena Scaletail and Elric Williams approached Irys in the Stormwind graveyard, managed to subdue her and drove the taint out of her at the risk of their own lives. Irys was finally able to recover entirely, and things quickly turned back to normal.

More to be added later...